There are three sticks of prayer incense burning to my left; today I’m writing at my dining room table instead of in my office.  Many papers to finish, and the time wastes away. I contemplate silence that doesn’t seem to end.  I contemplate a prayer for those that I love, a deep need to talk to God.  I contemplate the words that come to the screen, are present for a moment and then deleted like a digital letter thrown to the trash bin.  My bin is full now, and it’s spilling onto the floor with unspoken words.  So many ways to say something that just doesn’t need to be said.

The incense are unending prayer, something weighing heavily on my heart.   Unending. I need to call out to God like my forefathers in the land of the ancients, knowing that with each curl of smoke, my heart reaches into the heavens and God hears my plea of peace, for the pain in my body to subside.  I should have bought stock in Advil.  It’s the only thing that works on me today.

I love that word.

What do you think of when you think “unending?” On days like today, it’s tempting to think that the pain won’t end, but I know it will. Unending deserves better billing than my neurons torturing me.  What do you think of with “unending?”  It is a positive?  Can you send the circle of life and it’s beautiful, unending dance?  Is it the circle of promise in a ring, or the way that you feel about a song?  Is it the weight that you carry for something you’ve left behind but never forgotten?  What is unending?  Presence is unending. It is the memory of people who impact your life; it’s what they leave behind.  Part of you stays with one another as though you’ve exchanged tiny parts of the soul.  It doesn’t matter if it’s a pleasant moment, or an ADD moment or a bad moment…there are just people in the world that change you forever, that you honor with all you are, even when you want to smack them.  Lightly, of course, just enough to wake them up.

Unending. Maybe we pass what we learn from each other like a diamond from one person to another, an invisible band that can’t be seen, like an heirloom emotion.  I would be a dark pink diamond, even if there isn’t such a thing.  Pure female energy. Radiating love, needing a hero, albeit it an unconventional one. What kind of stone are you?  What are you passing on to the people that you love?  Moreover, what is it that you’re leaving behind with the world’s most vulnerable, the man or woman without a friend?  Do you see the people on the margins around you?  Do you engage? Why? Why not?

I spent the weekend reading “Friendship at the Margins” by Pohl and Heuertz, and can’t recommend it enough if you’re interested in the real world of “helping the poor.”  My heart is still aching.  It aches for several reasons, in truth ~ for the loss of love, the loss of innocence, the loss of time that people experience, myself included.  I wonder what the world would be like if we all had the courage to stand up to injustice, to knock people who traffic and support the trafficking of people in the head with a bat.  (Not lightly, in this case.) Slavery in 2011. Forgive us, Lord, for our ignorance, greed and stupidity. Free people to live in peace and grace. My God, what have we become?  When I heard that there was  drastic import of sexual slaves brought into the United States during the Super Bowl, I couldn’t help but think that if Payton Manning, with his support of the Children’s’ Hospital here in Indianapolis, and his own new set of twins, would be enraged. He might throw those people a pass that they wouldn’t forget…one to jail.  Can you imagine the black pit of despair that we create when we turn and avert our eyes from the monsters among us?  Desmond Tutu once said: 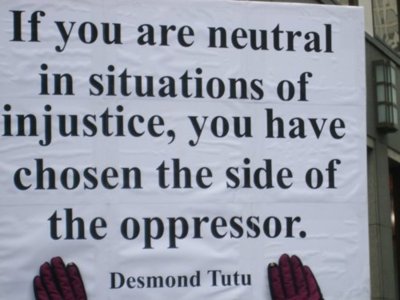 If you are neutral in situations of injustice…you have chosen the side of the oppressor. Does that mean that you have to give money to every person on the corner standing on the “please help” sign and looking for all the world like it’s the last moment that he has any hope?  That’s your call.  But knowing that there is an industry like this …. it can’t go unnoticed.  These people have to rent space, have a network, something.  they can’t totally be under everyone’s radar…and someone has to pay to exploit these people.  Some one knows that they do it…exploit young girls and boys.  You people that look away, it’s you that wears the guilt sweater, too.  Shame on you, and shame on we American’s for not believing that such a thing could happen here in our own country.  I don’t know anything about forced prostitution, but I’m resolving to make a change in the county I live in, even if it is just teaching classes or being a mentor. I am so caught up in graduating and being “something” at times that I forget there is a young mother with four kids trying her dead level best without enough help…and that is really where my heart lay.  All the while, I have more than enough, even in my own financial mess.  What I have to really give is time, and respect enough to listen, to not let her ache in loneliness.  I can be a true friend.

I want out of my comfort zone…and I want you to come with me.

Shame on me for kissing life with my eyes closed for so long.

So that is my depressing thought of the day.  I’m achingly lonely in this vast grey sky, I’ve lost my compass and my keys, and if the rain doesn’t stop soon, I am going to have to equip my house with oars.

God is faithful, and I will smile, breathe and…..pray.  I will wait for God to bring realization to light.