Ever feel as though the world doesn’t understand your mind, your life, your feelings?  Relationships in a mess, drama at all time high and you describe your life as “chaos?” Before someone asks you if you’re bipolar, think again.  It may be that highly treatable kissing cousin of the great bipolar debate, BPD.

Borderline personality disorder is one of those background diagnoses that are often overlooked as family practitioners work to help the patient that comes to the office.  Really, to meet with a qualified caring psychologist or psychiatrist about your mind is always the way to go.  A GP with great intentions might  see a pattern of instability followed by depression and immediately hop to “bi polar.”  The treatment for these two very different disorders, however, is not the same. 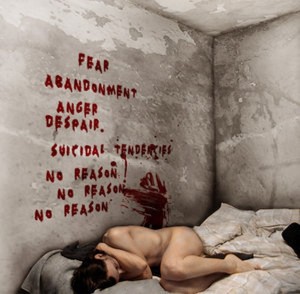 Suicide by car or motorcycle. Suicide by cop or jumping. Suicide by drugs, or a life unloved. All of them are not answers to the pain.

According to NIMH, the National Institute of Mental Health, this is the overview of life as a BPD sufferer.

“Borderline personality disorder (BPD) is a serious mental illness characterized by pervasive instability in moods, interpersonal relationships, self-image, and behavior. This instability often disrupts family and work life, long-term planning, and the individual’s sense of self-identity. Originally thought to be at the “borderline” of psychosis, people with BPD suffer from a disorder of emotion regulation. While less well known than schizophrenia or bipolar disorder (manic-depressive illness), BPD is more common, affecting 2 percent of adults, mostly young women. There is a high rate of self-injury without suicide intent, as well as a significant rate of suicide attempts and completed suicide in severe cases. Patients often need extensive mental health services, and account for 20 percent of psychiatric hospitalizations. Yet, with help, many improve over time and are eventually able to lead productive lives.

While a person with depression or bipolar disorder typically endures the same mood for weeks, a person with BPD may experience intense bouts of anger, depression, and anxiety that may last only hours, or at most a day. These may be associated with episodes of impulsive aggression, self-injury, and drug or alcohol abuse. Distortions in cognition and sense of self can lead to frequent changes in long-term goals, career plans, jobs, friendships, gender identity, and values. Sometimes people with BPD view themselves as fundamentally bad, or unworthy. They may feel unfairly misunderstood or mistreated, bored, empty, and have little idea who they are. Such symptoms are most acute when people with BPD feel isolated and lacking in social support, and may result in frantic efforts to avoid being alone.

People with BPD often have highly unstable patterns of social relationships. While they can develop intense but stormy attachments, their attitudes towards family, friends, and loved ones may suddenly shift from idealization (great admiration and love) to devaluation (intense anger and dislike). Thus, they may form an immediate attachment and idealize the other person, but when a slight separation or conflict occurs, they switch unexpectedly to the other extreme and angrily accuse the other person of not caring for them at all. Even with family members, individuals with BPD are highly sensitive to rejection, reacting with anger and distress to such mild separations as a vacation, a business trip, or a sudden change in plans. These fears of abandonment seem to be related to difficulties feeling emotionally connected to important persons when they are physically absent, leaving the individual with BPD feeling lost and perhaps worthless. Suicide threats and attempts may occur along with anger at perceived abandonment and disappointments.

But what is it?

What is Borderline Personality Disorder (BPD)?

The main feature of borderline personality disorder (BPD) is a long pattern of instability in their relationships with others, and in their own self-image and emotions. People with borderline personality disorder are also usually very impulsive. The instable pattern of interacting with others has persisted for years and is usually closely related to the person’s self-image and early social interactions. The pattern is present in a variety of settings (e.g., not just at work or home) and often is accompanied by a similar lability (fluctuating back and forth, sometimes in a quick manner) in a person’s emotions and feelings. Relationships and the person’s emotion may often be characterized as being shallow. The disorder occurs in most by early adulthood.

How common is Borderline Personality Disorder?

It is not very common, and is estimated to be found in 1 to 2% of the general U.S. population at any given time. It is more common amongst people seeking treatment for another mental disorder.

How does Borderline Personality Disorder cause problems?

Like any mental health issue, borderline personality disorder causes problems in a person’s social and life functioning by interfering with the person’s ability to reliably maintain these relationships or their everyday living. People with this disorder often cause a great amount of stress or conflict in relationships with others, especially significant others or those who are very close to the person. This can often lead to divorce, physical, sexual or emotional abuse, additional emotional problems (such as an eating disorder or depression), losing one’s job, estrangement from one’s family, and more.

What is the course of Borderline Personality Disorder?

There is considerable variability in the course of Borderline Personality Disorder. The most common pattern is one of chronic instability in early adulthood, with episodes of serious loss of emotion and impulsive control, as well as high levels of use of health and mental health resources. The impairment from the disorder and the risk of suicide are greatest in the young-adult years and gradually wane with advancing age. During their 30s and 40s, the majority of individuals with this disorder attain greater stability in their relationships and job functioning.

Borderline Personality Disorder is about five times more common among first-degree biological relatives of those with the disorder than in the general population. There is also an increased familial risk for Substance-Related Disorders (e.g., drug abuse), Antisocial Personality Disorder, and Mood Disorders, like depression or bipolar disorder.

Where can I go to learn more about Borderline Personality Disorder?

First, you can take the test HERE.  It’s free and fast, and can give you something to talk to the doc about if you find yourself living one life inside your head and another outside.

Psych Central has a reviewed list of resources you can consult for further information about Borderline Personality Disorder. They also recommend the following two books to understand more about this disorder:

← For “Bottom of Loneliness” – Hitting Bottom & the Dark Night of the Soul.
Are You To Sexy For Your Shirt? Take the test. →