The Owl has returned, and with it, my knowledge that the world runs through a power greater than mine.  Still, he always finds his way home, the little owl.   It is one of the ways that I know that summer is just around the corner; my little grey and white sweet bird has come to light on the House..and he is so welcome back into the beautiful mess that I call life.

The owl, who has no name, is my very favorite character in the host of wild animals that make up my yard.  It’s sad when I stop hearing him out side of our bedroom window in the fall.  Each summer he sits suspended high in a tree that brushes up against the rounded turret of windows on the south side of my house.  We met him as a chick…one day, Christian walked downstairs, across the driveway and nearly up to the three inch owl before his mother let her know from above that she was close enough.  We took pictures of the little white and grey bird-man then…and he’s been posing ever since.  A few years ago, he and Taryn had a staring match through the bedroom window, gazing at one another for a long while.  I didn’t take time to talk with him this morning as he perched on the guest room sill, but I’m sure I will get the chance as the sun rises another morning. Maybe he’ll chase the raven out of my yard that is causing a ruckus with the cardinals.  Life is never dull in my personal little forest. 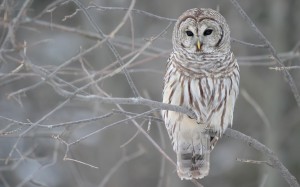 Something about his composure speaks to me, speaks of the universe and how it is moving silently all around me every minute of every day.  How at this very moment people on earth are living, dying, changing, growing, suffering, happy.  In other places in the universe, who knows?  The owl never sells out, never ruffles his feathers.  He grips the branch a little tighter when the wind blows, but still there is never a time when he doesn’t just blink across at me and nearly smile.  He is what he is.  I like that.  I look forward to him being here.

That is part of the human condition, isn’t it?  A defining part? Everyone wants to known that there is someone out there, someone that makes life worth living, someone that chooses to believe in them more than air, life, gravity.  That kind of certitude that they matter, they exist for a reason.  It’s a beautiful thought ~ but I’m not sure how realistic.  I know that there people I would willingly enter a burning building to save, or die trying.  I suppose that those people, they know that I believe in them more than reality.  Brian, Taryn, Shea, Christian, Donna….it’s a pretty small circle of people, really.  I can’t imagine that there is much difficulty imagining giving your life for someone, dying for someone that you love.

Can you live instead?

What if we took that idea and left it in it’s context, except one word.  What if I was willing to risk it all and love with all of me, daring harm, possible threat, unknown peril and all of those things that go with running into a burning building, and instead, lived life.  Living for someone you love.

What if that someone begins with you?

Would I run into a burning building to save myself?  If yes, then why do I have so many problems walking out of the burning building that I stand in, the one that keeps score of the past, of love lost, of all those hurt feelings that come from growing up, failing, losing?  It is what it is. You cannot change the past, but it can certainly change your future.  It’s your choice if the impact is meaningful and positive or just more destruction.

I’m thinking that in the context of being mentally healthy and well, we have to really look at why we act like we do, where our communication breaks down both internally and externally.  If you’re in mood swings, depression or automatic thoughts that you cannot control, there is a real chance that you are suffering from problems rooted in “control.”   I’ve used the word codependency so often, I am almost afraid that people are going to become immune to it.

• Having low self-esteem. Don’t think that this means you act down in the dumps 24/7.  Some people with low self esteem are the loudest, most upfront people you know.  When you’re not looking, they’re shaking.
• Difficulty setting boundaries. Codependent people have problems with the word “no.”  They overbook, and attempt to control the world around them so that it doesn’t “fall apart.”  They may live a life of chaos, but it is the pain that they know, and they’ll fight you to keep it.  Strangely, this inability to set boundaries also allows the person to have a gradual increase in tolerance for things that are morally reprehensible to them (such as physical violence) because their own judgement on right and wrong continues to erode.
• Knowing yourself, knowing what you want. People who are severely codependent cannot talk to you about their own hopes, dreams, aspirations.  They have no realistic idea about what they themselves feel, except pain.  They will talk about the kids, work, even sports; things that are controlled.  The communication of inner feelings not used to manipulate or control is highly infrequent.
• Taking care of adult needs and wants. A severe codependent may appear to be really dedicated and functional. They may have a large family to manage, be highly involved in work or church, involve themselves in everything (or nothing but their addict/ill/controlled family member.)  The point is to divert their attention onto the subject of control, like an addicted or ill spouse.  Controlling the world of that person takes precedent over any personal needs like education, encouragement, wardrobe, etc.  Personal growth is nonexistent.
• Difficulty experiencing and expressing reality moderately.  I remember the first year that I took the EQ-i in graduate school, I was aghast to find out that my reality testing was the lowest score on my psychological makeup.  Part of this is explained by being a writer; I do have to be able to create a whole fictional world to write what I do.  Still, reality testing is so important.  Low impulse control coupled with poor reality testing shows that you’re going to have difficulty acting out on child ego emotions, while a low reality testing with good adaptation skills indicates that you’re going to modify, recalibrate – almost immediately.  All sanity aside, we can be really adaptable as human beings who are dedicated to an idea. The figure above is not mine, but did not come with copyright info, so I don’t know who to cite for it.  It’s a good image of what I call Level 1, or basic codependency.  You can exist there , but you’re stressed, chaotic at times and restless.  One person (or more) enables the behavior, which may (and usually) escalates.  The enabler may also have been codependent from childhood if his/her parent or family of origin had a history of dysfunction.  Level 2 is a much greater degree of pathology, and needs intervention.  The enabler reinforces the system of reactions in the addict, or becomes a fellow addict (again, remember that their are addictions to everything from television to  chocolate chip cookies.  It’s defined as something seriously out of balance that consumes a great deal of mental emotional energy. It’s not always things we use hushed voices about.)  It’s important to note that “right” and “wrong” become more like laws of life and death.  They’ll become more militant as the disease progresses, segregating the family unit further from “normal” society standards.

By level 2, children are included in dysfunction to the extent that one or more parents is actively codependent and addictive.  Children are like little recorders, who by age two are patterning all that you say and do, even if you’re not interacting with them. Remember ~ addicted to work, golf, television, video games, porn, sex, heroin…they’re all detrimental, although some “seem” more detrimental because they’re illegal.  At level two, the children will grow and manifest these same things in their lives, and I do not care how wealthy, well respected, moral or perfect the family appears to be.  It becomes generational.  Level Three: living in chaos.  Your life feels more like a life sentence, although you walk around partially free.  Child development is retarded by the psychological and social situation at home.  As a participant, you may be diagnosed with a psychological disorder like manic depression or borderline personality; and may have all of the symptoms of one.  You feel as though you are totally out of control, going crazy, and you’re screaming inside to get it “back.”  There is no lasting joy; you feel largely numb or pissed off.  Your needs are not being met by you, or anyone else.

There is no judgement in each of these levels, only the ability to find recovery options, work it out.  Find a lasting peace and grace.  To be the owl knowing to grip loosely until the wind blows, and where to return in life that is both welcoming and safe.  In the end, it is what it is. Trying to control life, especially the flight of the owl (other people), is just the definition of insanity and doomed to failure.  Let go, life free, breathe and seek peace.   Ask for help, tell the whole truth in love. Self recrimination, loathing and fear are a waste of time and resources.

When we don’t recognize the truth for the simple knowledge that it is, that is when things get weird.