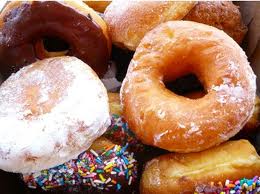 It’s National Donut Day.  Is there any better time to celebrate life’s most important pastry in the world with a cup of java or a cold glass of milk?  It’s impossible to be depressed around donuts in my life, unless you happen to be diabetic, and then…not so much.  My friend Derek who has diabetes said he ate some cake once and it nearly sent him into a coma – I can’t imagine what the powered sugar coated, raspberry filled Bismark Taryn is munching on would do.  So for all you diabetics, sub the word “sugar free jello” when you see the letters “donut.”

Donuts have been around for a while, too.  According to Wikipedia

“Hansen Gregory, an American, claimed to have invented the ring-shaped doughnut in 1847 aboard a lime-trading ship when he was only sixteen years old. Gregory was dissatisfied with the greasiness of doughnuts twisted into various shapes and with the raw center of regular doughnuts. He claimed to have punched a hole in the center of dough with the ship’s tin pepper box and later taught the technique to his mother.

According to anthropologist Paul R. Mullins, the first cookbook mentioning doughnuts was an 1803 English volume which included doughnuts in an appendix of American recipes. By the mid-19th century the doughnut looked and tasted like today’s doughnut, and was viewed as a thoroughly American food.”

So donuts (or doughnuts for those of you who want more letters) have been with us for a while.  I’m not sure of the nutritional value of a “sweet fried oil cake” but you have to love the taste and texture.  It’s like pie – how can anyone not love pie? There is something elementally satisfying about a warm Krispy Kreme as you watch it come off the conveyer belt all covered in frosting goo.  In college we used to stop playing D & D (yes, I am a child of the 80’s and there was no such thing as the Internet or Facebook) to hit the 3 a.m. opening of the bakery in downtown Chickasha where hot donuts were an art form. Then as you grow up, your facinaiton with donuts is supposed to wane. Being grown up you don’t long for benet and chicory coffee in the French Quarter of New Orleans cause it’s just not….grown up. I will be the first one at the Cafe DuMonde, however, for my coffee and sweet treat at the next available opportunity.

Now that I am here, I think that growing up may have been slightly oversold to us as teens.  Donuts don’t go straight to your thighs like they do in your 30+ years. No summer vacation, life marches aross your face leaving traces of time.  Everything changes.  Your babies become mothers, husbands, business people…army soliders.  There is a thought that will cause you to crave a donut.

Donuts make me feel like it’s a lazy Saturday morning and there is ample time to just be together and magically, I won’t gain ten pounds from one confection. They are the ultimate comfort food, which I appreciate today when I’m ancy in my own skin.  There is no real cause behind my anxiety….it’s that perfect day with my daughter, grocery shopping is all done, and the last load of laundry is in.  I have to iron for an hour or so this weekend.  It’s time to go watch Taryn ride her bike a while.  The sky is an amazing blue, and I am really ready for my baby to get home from work.  We’re playing croquet with the girl, make some spicy orange chicken and eggrolls, and maybe going to have a movie before bed.  Saturday Brian has pre-tourney play at a course in Richmond, and I am going to the Farmer’s Market. Sunday, I preach at a small church in Lebanon, Indiana.  See, it’s the perfect moment for a donut all weekend long.

I think that I’ll break all the rules and eat donuts on the way to the hospital on Monday morning, then when they poke me with needles, raspberry filling will be my new blood type.  Just teasing.  I wonder if Bismark’s show up on an MRI of your head?  Little pictures of wishful thinking floating around in my mind, in the shape of a cinnamon roll or a frosted cream filled. They could make dount flavored steroids and anti-inflammatory.  I will take a double order of each, right this minute if it will make everything stop hurting, especially my head.

I hope that you have a donut or two today.  Really beautiful ones, not those little rolled up things that they sell in the convienence stores.  Something someone made today.  Be a sport and try something totally new, a placce that you’ve never been…like an independent bakery from days gone by.  There is one that we go to in Chicago that is so good, I swear to you that I would drive the four hours to get there just to go to that bakery.  It’s my favorite.

All you health foodies, no wrinkling your nose. Life without donuts – a sad proposition.  I realize that I promote eating healthy all the time, and I do practice what I preach, truly.  There are a couple of moments in like when you just have to eat the donut (or biscuit, or cookie, or even pastry) and buy the shoes, no matter what anyone else has to say.  No,  I don’t eat them often because of that one HUGE issue most donut lovers have – eating the entire sack or  box of the sugary, heavenly treats.

That’s it for me today folks, just my ode to the donut, and my blessing to you to live a life less ordinary.