Learning is one of the most fun, engaging things that a person can do in life. I love to learn about unusual things…for instance, most people are surprised to learn of my absolute love for all things chaos and quantum theory. Give me a quantum physics book and I am entranced.  But how can you use that stuff in real life?  Simple.  Imagination.  You have to get past the boring lab rat stuff and all their technical jargon to see the amazing beauty of the ideas behind the “science.” {Sorry to all the lab rats, but ugh! I am a humanities girl.}  I can write a PhD level academic research papers with the best of them, but honestly…I love applying it to real life imagination so much more.  So let’s talk about chaos theory. 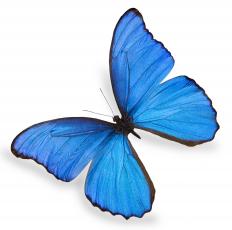 “In chaos theory, the butterfly effect is the sensitive dependence on initial conditions, where a small change at one place in a nonlinear system can result in large differences to a later state. The name of the effect, coined by Edward Lorenz, is derived from the theoretical example of a hurricane’s formation being contingent on whether or not a distant butterfly had flapped its wings several weeks before.”

Although the butterfly effect may appear to be an esoteric and unusual behavior, it is exhibited by very simple systems: for example, a ball placed at the crest of a hill might roll into any of several valleys depending on slight differences in initial position.”

“The butterfly effect is a common concept in fiction when presenting scenarios involving things like time travel and with hypotheses where one storyline diverges at the moment of a seemingly minor event resulting in two significantly different outcomes.” (Source: Wikipedia)

Do you ever think about the butterfly effect?  What about the moments of your day, turning left instead of right, going when you didn’t feel like going or staying home with that special sixth sense – crossing the road five minutes before, or leaving an hour late…what about your day may have changed the universe as you know it?  The infinite possibility of what if, that hope that is the root of all dreams.

Tomorrow may be the day that you have that breakthrough.

Five minutes from now, you may see or touch something that gives you a peace instead of living in grief.

You may end today a widow(er) or having met the most honest love you’ve ever known.

Somewhere in the world, not far from you, lives are ending and beginning, changing and remaking.

Into the vast universe, we all send the wisps of our own wings. 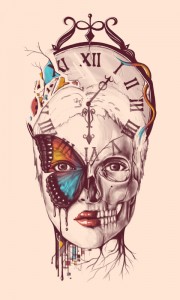 By Norman Duenas. You can order a print from this artist on http://society6.com/product/A-Butterfly-Effect_Print

What does that mean, step on a butterfly today, kill a million people three years from now?  The phrase refers to the highly debated scientific idea called “chaos theory” and it goes something like this.  It is possible that a butterfly’s wings might create tiny changes in the atmosphere that may ultimately alter the path of a tornado, hurricane or storm.  It could delay, accelerate or even prevent the occurrence of an event like a tornado in another location. The flapping wing represents a small change in the initial condition of the system, which causes a chain of events leading to large-scale alterations of events.

Had the butterfly not flapped its wings, the trajectory of the system might have been vastly different.   Had you made one choice over the other, the result of your life, your circumstance would in unalterably different, causing a whole new set of things that the other timeline you is dealing with right this very second.  While the butterfly does not “cause” the tornado in the sense of providing the energy for the tornado, it does “cause” it in the sense that the flap of its wings is an essential part of the initial conditions resulting in a tornado, and without that flap that particular tornado would not have existed.  What changes has it caused in the world that I went rock climbing one day, or met a person in the hospital, that I went home instead of waiting, that I said “yes” instead of “no?”  What unalterable history dissolved into a new reality?

Wow, I love the paradox of the butterfly effect because it says that nothing is definite…the butterfly hasn’t landed yet, and it’s not yet there to flap a wing. Maybe it won’t come at all.  Maybe that obsessive tug we get about a certain person or place is our soul pleading with us to be where we were supposed to be – not where we “should.”

There is a movie by this title that features a really good acting job by Ashton Kutcher.  I liked the movie, and was again considering today the repercussions ~not in the bad sense ~that sometimes come with the decisions that we have made for us in our lives.  Things beyond our control. In the end of the movie, the hero has tried everything that he can to save the woman that he loves from fates both of death and of sexual abuse.  In the end, the thing that really saved her was sending her away. Although he wasn’t the one hurting her, it was the fractional of his movement in her life that started the hurricane.  On days like this day, when I am a little tired and recovering from a big long week – one that is set to continue through Monday – that I am also aware that I’ve sharply turned the course of my life. Yesterday was that moment of discovery; new sights and sounds, authentic life.  In many ways I’ve been released again from a chrysalis….and I wonder, as I stretch my metaphoric wings, what effect that will have?

I am sometimes surrounded by the questions and doubts of decisions that I’ve made, as I am sure that you are from time to time.  It it easier when you know that you’ve made it this far in the company of others like you, living in the moment, knowing that in the future you’re going to feel whole and well about the changes you’re embracing with shaking hands now?

Sometimes, I think that is the hardest thing that we have to learn in life – to recognize that sending oneself away from the pain another person’s life is the only positive contribution that we can make.

I love the idea of the butterfly effect. It’s so….full of possibility. No one has ever drawn if out for me far enough, how the delicate balance of time all plays out. There are moments in meditation that I feel like I almost come to understanding this one elemental piece of the universe….and then it fades.

I don’t understand …yet.