If you’re like me you love that last of the summer holiday’s….Labor Day.  It’s time to break out the BBQ, the steaks, hotdogs, whatever you desire.  It’s that fun in the sun moment when you realize that winter is just a few short months from being in full bloom.  Labor Day, oddly, is that last day off in the summer sun. 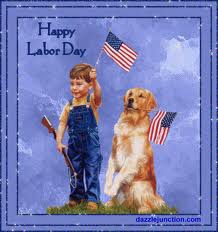 From our family to yours...all the best.

But what is it really?  I went out on the net for some research and here is what the other sites had to say…..

Labor Day is a national legal holiday that is over 100 years old. Over the years, it has evolved from a purely labor union celebration into a general “last fling of summer” festival.

The Socialist Party held a similar celebration of the working class on May 1. This date eventually became known as May Day, and was celebrated by Socialists and Communists in commemoration of the working man. In the U.S., the first Monday in September was selected to reject any identification with Communism.

In the late 1880’s, labor organizations began to lobby various state legislatures for recognition of Labor Day as an official state holiday. The first states to declare it a state holiday in, 1887, were Oregon, Colorado, New York, Massachusetts, and New Jersey. Then in 1894, Congress passed a law recognizing Labor Day as an official national holiday.

Today, Labor Day is observed not only in the U.S. but also in Canada, and in other industrialized nations. While it is a general holiday in the United States, its roots in the working class remain clearer in European countries.

It has come to be recognized in the U.S. not only as a celebration of the working class, but even more so as the unofficial end of the summer season. In the northern half of the U.S. at least, the summer vacation season begins with Memorial Day and ends with Labor Day.

Many colleges and some secondary and elementary schools begin classes immediately after Labor Day.

State parks, swimming pools, and campgrounds are all quite busy on Labor Day, as vacationers take one last advantage of the waning hot season. September is the month that marks the beginning of autumn. And, because of that, the average daytime maximum temperatures take a plunge during the month in most of the U.S.

So whatever your country, life or disposition, happy Labor Day.