I am in the matrix.  I am alive…and music is my soul.

Rob Dougan, has, behind the fully willing auspices of my back, been writing the music that drove me to write for years.  At those moments of memory when Neo walked first among the simulations, or when the Lord of the Rings crew faced a precarious moment come to climax….there was Dougan, chopping his indelible place into my heart.  There is no turning back from the absolute genius of his music. Behind the scenes of the all time two movies that shape my real theology – the Lord of the Rings and the Matrix – is the music of this overwhelmingly beautiful man.

It’s enough for you to reconsider waiting for that long lost love or the guy that is locked up in the looney bin.  Okay, not really, but you get the general idea.  For those of us who are into that angst ridden emotional male, the band members of Apocalyptica and Rob D. are like the ideal mate set to music.

Rob is by far one of those really talented people like the guy who was in V for Vendetta and played the Elf King, Hugo Weaving, along with the agent in Matrix.  Funny that so many of these people are in the same movies over and over.  Someone has my ideas in their head.

According to that savant of the Internet, Wikipedia….. 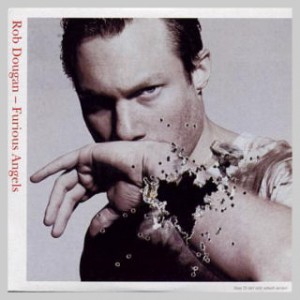 In 1990, Rob Dougan’s friend Rollo brought him from Australia to London. From 1991 to 1995, “Rob D” was a Producer and remix artist. In 1994 his remixes started charting in the UK. He also released his first single, “Hard Times”.

In 1995, his hit single “Clubbed to Death” gave him a recognized name in the UK dance club scene. He produced almost a dozen remixes of it, including the “Kurayamino Variation”. His label Mo’Wax Records was pleased and commissioned the follow-up, “Clubbed to Death 2” (later the bonus track on the album). CTD2 initially appeared on the James Lavelle disc of the 1996 DJ mix compilation album, Cream Live 2.

“Furious Angels” was not released on Mowax but Dougan eventually released it as a single in 1998 with his new label Cheeky Records. Dougan worked for the following six years, doing remixes and licensing his tracks, in order to self-produce the album which was backed by a full orchestra and a full choir.[verification needed]

In 2002 in the UK, and 2003 in the rest of the world, Dougan released his debut album Furious Angels to critical acclaim and some surprise from the new tone of his work, as well as from his own Leonard Cohen-esque gravel-voiced vocals. Later in 2003, a two-disc re-release of Furious Angels featured all-instrumental versions on the second disc.

In 2006, Dougan was reportedly writing “a couple of songs” for Sugababes (for whom he produced the single “Too Lost in You”), and working on two albums of his own — one original, one classical.

As of April 2008, Dougan is mentioned in a wine blog as an owner of a wine vineyard La Peira En Damaisela, leaving questions about the supposed two albums he had been working on.

A short film made for jewellery designer Solange Azagury-Patridge, “The Letter”, directed by Laurence Dunmore and starring Thandie Newton and Jason Isaacs features new music by Rob Dougan; the short film, however, does not mention the title of the song.

Music from your past,….the Matrix’s “Clubbed to Death.”

← Rethinking “Possibility”
For “Help Me Mend My Broken Heart.” →