It’s been one of those days that end in the phrase “crash, crash, boom” for me, my mantra to remind myself that to much intensity is ….. too much intensity.  Time to box, time to climb, time to bat.   I have a set of actions that I take on days like today, those moments when the intoxication of being fully awake and alive also equals to much to be around others. 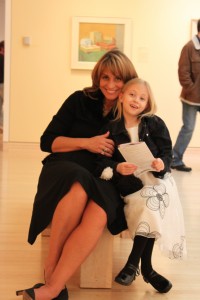 Alison and Taryn on museum day, soaking in the love of art with Brian. It's an amazing adventure we make often. They keep the Pissaro there in the IMA. (Sigh.)

It’s a writing day….a novel writing day. Here, I will include some music so you can hear the song on repeat iPod wise.  Obviously, 30 Seconds to Mars has taken the Linkin Park role in book two – don’t worry, fans, Chester and Michael are the men of my musical muse.  Still, this is 30STM with “Night of the Hunter” from the album “This is War” that you should (with any luck) hear in the into of the movie. 🙂  I have no limits.

30 Seconds To Mars-Night Of The Hunter

I’m taking a break on Tuesday to go to a life coaching class with my mentor, Tim Shurr, and then to group dynamics class with Michael and the crew at 2.  Home by five.  I have something so, so, so important weighing on me.  Book two begins to infringe on my waking hours, to interfere in my thoughts more than the human world, one that I willing give myself over to.  How I long for Lake Lure, the steps of Katerine and Lucian, the battle of good and evil.

I am a writer.

This is my process.

The first book is called “The Soul Thief,” and is the greatest work of my life.  I am rewriting one little part – the ending – because I finally know how the second book starts.  I had it wrong to begin – the title was off.  For those of you that were expecting “Dulos,”  my fave Greek work…it’s nixed.  Maybe in book three, but no promises.  It’s amazing how the freedom of knowing the real title is to me.  Echelon.   In the Greek,  ιεραρχία επιχείρησης, the next thing or the next phase of the ladder of life.

It was there all the time. The following?  The song….Echelon, by 30STM.  You would expect less?

It came to me as I was driving alone in the night, home from that long Monday stretch that has me giving up on grad school every week.  This week?  American Red Cross Psych training for people experiencing a disaster.  Very cool for a girl that works an emergency room in the hospital pretty often.  But suddenly, there in the car with me was the brunt of the story, the reason that I was writing, the humanity of it all.  The conflict.  The heartbreak, the loss.  There was, as clearly as the road before me, a story to tell.

I love the duality of it all.

So I am off to write for the long hours of the night, but have one of those grown up, helping you articles planned for morning.  Tonight, I just wish you the healthiest, happiest moment that you can have, where ever you are.  Be engaged with the life that you wake up to, have passion and intensity, be wholly in and committed.  Let your life leave the imprint of who you really are….no fakes.  Say the truth, love ruthlessly, harm none.

Be well, friends.  I am off to adventure-land.  See you on the other side of the new pages.