It’s been the hot topic of so many blogs, newspapers, and even television shows.  EL James’ book series, Fifty Shades, first came into my view before it was popular.  It surfaced on the digital bestsellers landscape unexpectedly…and to be honest, I didn’t read them when Brian downloaded a sample to the Kindle.

Fifty Shades is an interesting concept, and a good read.  Once orphaned, desperately abused Christian Grey meets new college grad (in her final weeks) Anastasia Steele.  If the characters remind you of Twilight, don’t worry; the book was originally written in an ode to that series by a dedicated fan.  The brooding, tousle headed, mercurial Christian is the dark side of Edward…albeit not immortal or drinking blood.  Instead, he exerts control the only way he can – as a dominant, a term from the bondage/S & M sexual world.  You see, Christian has some serious psychological damage that came to a crescendo in his teen years.  It was there that a predatory woman men the young Grey and introduced him to B & D as a lifestyle he could connect to. 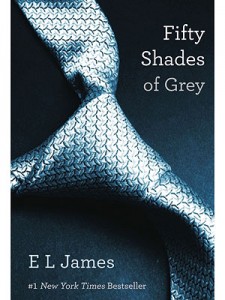 Fifty Shades is sexually explicit in a way that I’ve never seen a commercial novel exhibit; it finds the line of “wow, that’s graphic” and pounces over it repeatedly, licks it on the lips and then gives it a spank.  I’m not really phased by it all – after a while you kind of become immune to the explicit part as you understand the deeper story line.  I read one conversation on a blog that touted all these comments like “I would never let anyone do that to me,” and “I am worthy of honor and faith and God wouldn’t support that.”  Wow.  It took less than a minute for the respondents to play the Jesus card.  Mmmmm. I have a Master’s degree in Divinity.  I’m not willing to throw religion into the pile. If you’ve ever read the Song of Solomon, you’ve read the “sexually explicit” part of the Bible – really racy for it’s day.  I think that God’s up for we humans having real discussions about real stuff….like the fact that the man you fall in love with (or woman) may have some truly devastating issues in their past.

Fifty Shades is filled with psychological realities in the extreme, one that highlights something that we need to have a conversation about.  This book is popular because it targets a group that “shouldn’t” be this way…people who want to feel that sizzle of being in love passionately, sexually, with deep feelings.  For some, that is a memory – some never had it at all.  What does it say about how we live in our relationships, the level of intensity that we bring to our role as a couple?  We often get so lost in our roles as Mom and Dad, worker bee or artist, to manage a hot relationship with our spouse or partner.  Yes, real life is substantially different from the landscape of Christian and Ana – it’s fiction.  But there are takeaways here.

Fifty Shades of Grey is fulfilling a basic human emotion for deeper, sensual connection to a whole group of people that speak that language.  I’m a highly physical, sexual person ~ for me, the book was a good read.  What does my husband think of it?  He was the one that told me about the unexpected vault from oblivion to the bestsellers list.  He knows exactly what I think about it and laughs that the book was great for my imagination. It was normal people like you and I who took this unknown, error filled self published manuscript from it’s place of oblivion where it’s rested for years…and turned it into the talk of the world.  We did this.  Housewives and husbands who shop at CostCo, make dinner and don’t actually own a flogger. Something about this book really grabs the attention and rivets you to the relationship between them both.

It’s not like the topic is all that different.  Young Ana, while having an admirable (and fictional) number of orgasms with her young husband – yes, he marries her – never becomes the submissive he thought he wanted.  There are best friends, family, and a evil guy from the past. There is that question of being both submissive and being whole. Instead of continuing down the same line, Christian learns how to deeply and intimately love another person.  I won’t destroy the book for you, but this is a great story of character development and strangeness all wrapped into one.  Yes, someone should tell James that we don’t write this sort of “mommy porn” as professional authors, but then to do that you’re going to have to get through the throng of admirers who surround her.  You see…something about Fifty Shades speaks up and yells “look past the sex to the story!” We do write this kind of thing (it’s not really mommy porn), but we douse it in pretty words and innuendo.  James doesn’t blanche from her stark reality in Christian’s life; he is what he is.  It’s James who shows the courage and straight up talent to put all this highly explosive emotion into two people and still produce a book where you want to know that there is a happily ever after, even when they might wear leather handcuffs for part of it. 🙂

Decide for yourself if Fifty Shades is for you. Don’t just listen to the hype and make the “I sucked a lemon” face. Amazon offers first chapters for free – I highly doubt that you’re going to find it in to many libraries.   But know this – Fifty Shades may take you somewhere you’re afraid to go.  It may highlight that you don’t feel connected or fulfilled, or that you have fantasies you haven’t told your spouse about.   Maybe it’s time to have that discussion – or not.  Most importantly, it’s that you’re learning one thing from Christian and Ana….be honest about who and what you are.  Ask for what you need.  Explore your own sexuality in a place of trust.  Love unconditionally.  Forgive the small stuff…and the big stuff.  Be alive.

Well done, E.L.  Thanks for giving us characters worth getting addicted to – and for spanking the rules.

← The Secret to Living Happiness
Being Grateful →