Yes, they happen to all of us…..”one of those days.”  Starting with a small whisper of trouble, I realized to late that I left my phone in North Carolina at my sister D’s house.  Technically, that was Sunday.  Not only that, but my iPod is dead.  My iPod is never dead.

Monday, my first class after Thanksgiving is Research Statistics.  We had a final, then a lecture.  Next class, the “big” research paper was due. I would have spent more time proofing it, but D and I were to busy cooking and having a million laughs putting a clown wig on brother William.

We drove home in the pouring rain.

So much for time off.

By Tuesday, the rain that pelted my house made it’s way under the new flat roof coating, into the third floor (under major construction) and onto the 2nd story ceiling of the main hall outside my bedroom.  That means that it wet down a 150 year old lath and plaster ceiling  ~ one that is 15ft in the air ~ in a house that does not find water of any sort humorous.  So, it dripped….onto the hall table, right onto a silk covered brass lamp. Great. I’ve bought some form of new roof every year for the last five years.  I know that this place is big, but damn.

It doesn’t help that the huge rug from India, all of the antiques and the bedroom decor of the main guest room are just further down the hall while the room is remodeled ceiling wise…and a new coat of paint to the main wall across from the fireplace.  So here I imagine the worst  ~ wet, heavy plaster falling into the two story main hall, damaging all my original wood staircase and the exquisite 100 year old wall paper that covers the main entry, not to mention that 300 pound rug that I will never be able to replace….and I trudge up to the third floor, buckets at the ready.

I have to tell my husband.

I don’t have my phone.

Time to hook up the old land line that we never use.

I finished my work for home and school, and headed off to class.  Taryn had chippped her tooth, so I was planning a evening emergency appointment with Brian to our dentist, who is 45 minutes from my home.  Taryn is a heart patient, and the whole dental thing is a big deal for post surgical kids. So I rushed to school, in the rain.   It was like Noah was coming to visit.

Forgot my umbrella at home.

Walked a block and a half in the rain/sleet in one of my favorite leather coats.

Between class at 2 and my early departure at 3:30, it snowed over an inch and a half in Muncie.  Driving home was slow ~ 25 mph slow.  I made it all the way in traffic, turned onto highway 3 south toward Rushville, came over a hill and bang!  A snow plow had left a ridge while clearing the opposite side of the road, which grabbed my tire as I poked toward home. 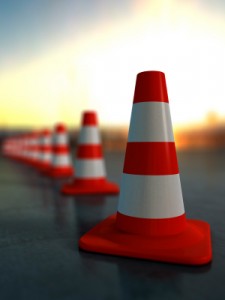 I could have used a few of these bad boys.

Spin around once on the ice slippery slushy snow.

Spin around twice on the slippery snow.

I was doing it all right, being careful, being good, going really, really slow.  Still, I am sliding, spinning, all graceful and slow like. You could almost consider it a waltz step, except I am about to both wreck my car and throw up.

Oh great, there is a pole and a signpost, right next to that six foot incline I’m about to go over – sideways.  Romp on break.  Car stops with it’s tail end in the air.  I. Am. Stuck.

Now it’s snowing even harder and you have about fifteen feet of visibility.

I listened to Janet Parchall on Moody Radio, and Chris Fabry while I waited for 1. someone to stop who had a cell phone and 2. the tow truck to arrive.  Getting out of the car is tricky- its resting catywhompus with the rear passenger  tire two foot in the air, and the front driver’s tire bearing all the weight, buried in snow and mud from the corn field I’ve just touched down on.  People stop.  We all stand in the snow. My hair freezes.  I thank them – profusely – and climb back in the car.  There is traffic everywhere. Another driver comes over the hill and starts to swerve toward me.  I think….damn.  They corrected, I put back on my seatbelt and turn up the radio.  I really need my Linkin Park fix about now…but my iPod is still dead.  The nice kid who stops calls Brian.  Brian – in a moment of insanity- calls my sister in North Carolina.

Somewhere, a UPS truck has my phone that is ringing off the hook.

I smiled, wondering if it was off the road, too.

Tow truck arrives, and after a short bit, yanks my car from it’s dismal state.  We check, find that it’s drivable and pull into a parking lot not to far away.  That waltz cost me $65.00.  I think about the AAA insurance that we didn’t renew and put it at the top of my to do list.  He calls Brian for me as I motor toward the house.

The drive home was super slippery.  It took three hours to get from school to my house, missing all the dentist, half the traffic and all but one embankment.  Finally, I am home.

Daughter meets me at the door.

“You could say that.”

I’m fasting for thirty days as a faith based detox celebrating my MS ‘remission’ and to lose the forty pounds that I packed on taking steroids and anti-inflams….and being a piglet.  Three days into a fast I am naturally pretty hungry which makes this a crack up time for fixing the dinner that I cant eat.

I made it from the utility door to the garage all the way to the kitchen with no major crises.  My husband, with a small smile, hands me the door tag that says….. after living in this house for a decade….. they’ve turned off our water becasue I didn’t pay our bill.

I did pay our bill, I explained. I just mailed it this time.

He turned on the faucet.

I made dinner while he tried to figure out where I mailed the water bill.  Usually, I just pay it in the office, but I was writing and being a little agoraphobic.  I love my house.  I don’t like to leave it.  Hell, I don’t like to leave my hometown.  I love it here.  It’s a great place….except when they act a little silly.  I’ve never not paid my bill, and we have a deposit.

I am cold, dripping and covered in melted snow and mud.

With my previously frozen, soaking hair I contemplate going outside to gather up a bunch of snow and melt it to fill the toilet tanks, then realize that I have water storage for when the pipes freeze.  Sigh. Brian and Taryn are building a fire, the steaks are sizzling, veggies are sauteing, and my fast homemade soup (aka D’s soup mix from her garden) is almost done.

It’s been a really horrible day…..and I can feel it creeping in like fog on little cats feet, darkening my emotions and bringing with it that yucky stressed out feeling of panic.  I am ready, now, to be really bitchy.  Nope. No can do.  Hubster is playing with daughter, fire is popping, this is the life that I love.

I need to assess my perspective. It’s not that I am that smart, I just glanced over to this website which was open on the desktop…. I thought of the hundreds of hours I spend talking via email, posting articles, journal entries and the like…it won’t be worth anything if I don’t live the life that I promote.

Okay self…..adjust your state.  I hopped up and down, and took a deep breath.  I hugged myself, then my kid, then my hubster.  He was being the biggest angel in the world, not even a little freaked out that I apparently dropped the water ball, on the same night that I failed to pass the driving in the snow test.  I talked to myself.  I said….

No water.  It’s temporary.  At least Taryn won’t spend forty minutes playing in the shower.  We loose water at least once a year when the pipes freeze and we have to crawl under the house and find the exposed part that has gummed up the works.  Last year, it was the main water value frozen where it comes out of the ground.  This is why I own lots of dry shampoo and a drinking fountain with one of those big water bottles on top of it.

Accidents happen.  What a blessing that there was no one in my path when the car went sideways, that no one was hurt – even me.  The car has some minor scrapes.  That is okay.  We’re all okay.

I’m home.  I love home.  It’s beautiful outside, now that I don’t have to drive in it. The house is clean….and I don’t have to load the dishwasher until later.  That is good.

God blessed my little road trip with a reminder that I am part of a community that cares, that people still stop to help and lend a hand, and that there is real goodness out there amongst this county filled with it’s own issues.  Thank you, Father, for not letting me hit the pole, for no one else hitting me, for the chance to realize how blessed I am instead of being bitchy.  Really.  Peace and grace walk with me.

Dentists make other appointments, school work comes and goes and my fast will end.  I took another deep breath, thought through my perspective and cuddled in with the hubster after they’d had dinner.  We watched Hulu since the satellite was busy fighting with the storm…and Brian kept being Brian until I was laughing.

By midnight, the day didn’t seem so bad anymore.