Elizabeth Barrett Browning lived in England, born in 1806 and died in 1861, the same year that my house was born.  She was an amazing writer of unparalleled courage, having survived a lung ailment and spinal injury at twelve to face a life of morphine addiction.  Her life was troubled and tough for an individual borne to great wealth and privilege.  Her writings often inspire me when there is no inspiration to be found; I love the texture and the certainty in her words.  I love amidst a day when life is challenging that you can open this window to the soul and be transported to hear her clear voice; that it was so genuine in it’s construction, it has stood the test of time.  Elizabeth speaks of life to me.  It was her writing that husband Robert Browning would later fall in love with, as he did with the soul of Elizabeth herself. 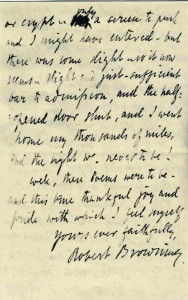 A letter from Robert

According to Wikipedia, her 1844 volume Poems made her one of the most popular writers in the country at the time and inspired Robert Browning to write to her, telling her how much he loved her work. He had been an admirer of her poetry for a long time and wrote “I love your verses with all my heart, dear Miss Barrett” praising their “fresh strange music, the affluent language, the exquisite pathos and true new brave thought”.  Robert Browning arranged to meet Elizabeth on 20 May 1845, in her rooms, and so began one of the most famous courtships in literature. Elizabeth had produced a large amount of work and had been writing long before Robert Browning had. However, he had a great influence on her writing, as did she on his: two of Barrett’s most famous pieces were produced after she met Browning, Sonnets from the Portuguese and Aurora Leigh. Robert’s Men and Women is a product of that time. Some critics, however, point to him as an undermining influence: “Until her relationship with Robert Browning began in 1845, Barrett’s willingness to engage in public discourse about social issues and about aesthetic issues in poetry, which had been so strong in her youth, gradually diminished, as did her physical health. As an intellectual presence and a physical being, she was becoming a shadow of herself”. Her doctors strongly encouraged her to go to the warmer climates of Italy to avoid another English winter, but her father would not hear of it.  It’s only in the tales of old that you hear of this writing, this dedication, although my young daughter is rivaling Elizabeth as a new young Army wife with a husband thousands of miles away in training.  Still, for those of us romantic of heart, what it is to receive a love letter of such honesty from the one that you adore, to wait in a world of no internet or phone to hear a word from the pen of your only heart?

According to the professional Poet’s bio, Elizabeth and Robert, who was six years her junior, exchanged 574 letters over the next twenty months. Immortalized in 1930 in the play The Barretts of Wimpole Street, by Rudolf Besier (1878-1942), their romance was bitterly opposed by her father, who did not want any of his children to marry. In 1846, the couple eloped and settled in Florence, Italy, where Elizabeth’s health improved and she bore a son, Robert Wideman Browning. Her father never spoke to her again. Elizabeth’s Sonnets from the Portuguese, dedicated to her husband and written in secret before her marriage, was published in 1850. Critics generally consider the Sonnets—one of the most widely known collections of love lyrics in English—to be her best work.